You are here: Home / Web Publishing / Surpassing 3,000 Fans on Facebook Via Paid Traffic

Just a few weeks back, I wrote a post about how I Got 1,242 Facebook Fans for Only $347.70. The post became really popular, got some great comments (thank you to all who commented), and inspired me to push my campaign even further, much further!

Today, I’m thrilled to announce that I drove a total of 3,156 likes! (This is not the PPC Ian Facebook Fan Page, but is a Fan Page for another one of my authority sites.) Out of my 3,156 likes, 2,938 are from my paid campaign. Since I paid $965.42, but got a $50 coupon thanks to my wife, I ended paying $915.42 or $0.31 per paid like. Not bad, and very consistent with my results last time. Today, I wanted to close out my test by sharing a few thoughts (while hopefully inspiring you to run your own Facebook paid like campaign)!

75 Wall Posts or Comments Within 1 Week

Paid likes are some of the highest quality Facebook Fans around! Just check out the image above. Over the past week, there have been 75 wall posts or comments. The majority of these have been fans commenting on my wall posts, fans posting their own questions, or fans liking wall posts. For only $915.42, I created a vibrant community that is sharing my content and driving traffic to my site. Paid likes are of really high quality (just like paid search traffic from search engines).

I’m viewing social media, especially Facebook, in a new light. I’m a paid search guy and am used to paying per click as I go. Facebook is the same thing, but you pay first! Think of it this way: You pay/invest a lot of money, drive paid likes, leverage those likes to drive interaction on your page, and then get visits from your fans over time.

It’s estimated that Each Facebook Fan Will Drive 20 Visits To Your Website. $0.31 (my price per fan) for 20 visits is really great, that’s only $0.016 per visit (certainly cheaper than AdWords or adCenter). Even better, this doesn’t even take into account the branding and SEO advantages of having a vibrant social media program. Looking at things in this light puts a whole new spin on Facebook and is a great way to pitch the idea of increased social media budget to your organization.

When you open a new Facebook Ads account, Facebook will throttle you. In my last post, I mentioned how my impressions were throttled and then I got a surge of traffic all of the sudden at the end of the test. I originally thought this was due to Facebook fighting ad fatigue and evening the impressions over time. I was wrong. It’s because Facebook put a $50/day budget limit on my account but then lifted the limit to $200 once a number of successful credit card charges went through. Just something to be aware of when you open a new account.

If you drive enough likes, you can create a self-sustaining community on Facebook. My interaction with my Fan Page in this case study has not been very extensive at all. Fans have actually been asking other fans questions. The community is vibrant and self-sustaining to a degree which is super cool! I just need to keep an eye out for community members posting their own links. I’ve had to remove a few, but other than that the comments and interaction has been super genuine. Of course, I do expect this interaction to decline over time as the hype and freshness of my page wears off. It will be at that point that I jump in with some clever ideas and/or run another like campaign.

So there you have it! Now, my campaign is paused as I didn’t want to go over $1,000 total media spend for this initial test. What are your thoughts on paid Facebook like campaigns? At $0.31/fan, should I keep running this program until the price per fan starts going up? I’m certainly tempted! 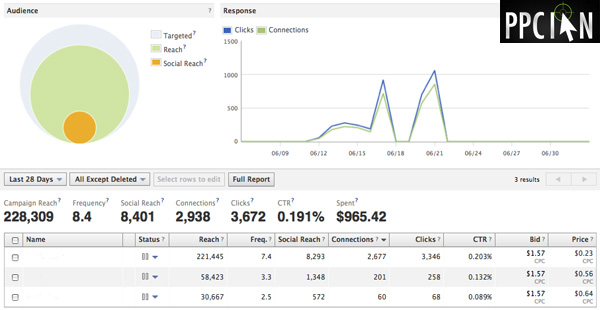